Over the course of a year in food writing we eat a lot of food across Little Rock. Most of it good, some of it bad. Sometimes however a dish stands out as a truly outstanding bite. It can be as sophisticated as a chef’s creative sushi roll, as unexpected as a really excellent cup of stew, or as simple as a perfect cut of bacon. Here, in no particular order, are the twenty best things we ate in the Little Rock area in 2014.
Beef Bulgogi from Forty-Two
Chef Stephen Burrow served this dish as part of a multi-course spectacle called “Around The World Thursday,” which occurs monthly at his restaurant. It was a menu filled with the exciting and intriguing flavors of Korea, a cuisine we are severely deficient in around these parts. His bulgogi was his greatest triumph…tender beef, both sweet and salty, paired with a soft boiled egg, marinated mushrooms and sticky rice. A beautiful thing, indeed. 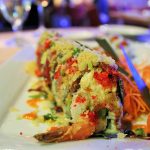 Alex Special Roll at Kemuri
Put your sushi fate in the hands of Chef Alex. He won’t do you wrong. What arrives at the table is an absolute work of art, filled and topped with whatever the master sushi-maker sees fit. Consider yourself lucky if peppered tuna is on the menu that night.
Deviled Eggs at South on Main’s No Kid Hungry Dinner by Felicia Suzanne
For South on Main’s second annual No Kid Hungry dinner they invited the culinary talents of Felicia Suzanne from Memphis to cook. The highlight of the dinner became her three deviled featuring eggs smoked salmon and caviar, hot sauced bacon, chow-chow with Flo’s tomato jam. While you will likely never see these deviled eggs in Little Rock again, you can always support No Kid Hungry at next year’s dinner. 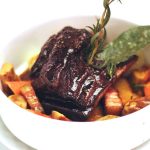 Braised Short Rib from One Eleven at the Capital
With the end of Ashley’s and the arrival of One Eleven, it feels as if Chef Joel Antunes has really taken hold of the kitchen and is finally creating the exceptional food he’s always been capable of producing. His braised short rib with crispy fried rosemary and thick cut bits of fatty pork belly displays his competence as well as any other dish on the menu.
Brisket Sandwich from Natchez
In a pork-centric state like Arkansas, brisket is certainly the underdog in most barbecue battles. Luckily, Chef Alexis Jones in featuring a hearty brisket sandwich on her lunch menu that would likely win over even the staunchest of the pro-pork people. It’s big, beefy, and a little messy…but it’s seriously tasty. 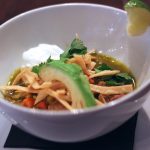 Green Chile Stew from Local Lime
Unfortunately, Local Lime’s green chile stew is a seasonal dish…indeed, it may only be around for a few more weeks. But this sensational stew is something that absolutely needs to make a re-appearance at some point. With sweet, spicy, and tangy green chilies, tender bits of pork, sour cream, and tortilla strips…every spoonful was a joy to consume.
Triple Dipper from Baja Grill
Sure, the burritos and tacos at this bustling Heights “Mexi-Cali” restaurant are excellent…but there’s really something satisfying about sitting outside on Baja Grill’s porch with a group of friends…talking, drinking, and sharing a “Triple Dipper.” This trifecta of guacamole, white queso, and salsa is always fresh and delicious…and finer examples of each you’ll not find anywhere else in Little Rock. 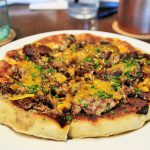 Skillet Bread at South on Main
This is a rotating menu item, so you’re best option is to ask for it and see if the restaurant has all of the ingredients to whip some up. This skillet bread, itself, is a doughier version of naan. If possible, order it covered in shredded brisket, cheese and tasso gravy. See how it is made in this video with Chef Bell.
Hot Chicken Sandwich at Hillcrest Artisan Meats (H.A.M)
If you like hot chicken sandwiches then this is the one. Technically called the “Not a Chicken Wing” sandwich, H.A.M keeps it simple with cubed roasted chicken thigh meat, Frank’s hot sauce, chopped celery, and blue cheese dressing. Big glass of water required. 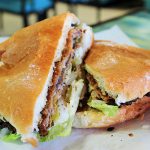 Beef Milanesa Torta at Super 7 Grocery Store
Together, super fresh bread, perfectly fried beef, ripe avocado and spicy pickled jalapenos make this torta one of the best sandwiches in all of Little Rock. Heck, even the shredded American cheese, which you so rarely seen, is a nice touch.
Caprese Salad at Big Orange
The bad news? It’s a seasonal dish. The good news? Arkansas tomatoes are fan-freaking-tastic, and no one highlights them better than Chef Scott McGehee in this caprese salad. Slabs of thick-cut heirlooms, basil, fresh mozzarella, and balsamic vinegar combine to form a perfect appetizer for two. 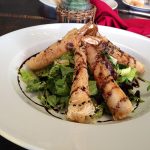 Fried Shrimp at E’s Bistro
E’s continues to surprise as an underrated restaurant, tucked away in an underwhelming Park Hill strip mall in North Little Rock. The restaurant is anything but underwhelming. This appetizer features crispy wrapped fried shrimp, then drizzled with a balsamic reduction sauce and served on a sweet orange-ginger vinaigrette spring salad.
Porterhouse at Doe’s Eat Place
This primal meat-eating experience involves a broiled slab of meat soaking in its own deliciously fatty juices. Crispy, charred crust and tender, medium-rare meat are what separates this steak-eating experience from so many others. 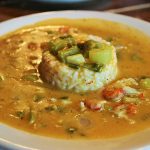 Crawfish Etouffée at The Faded Rose
This hearty portion of mildly spicy, slightly thickened, blond roux, along with veggies and small crawfish tails is topped with a pile of rice and tender celery.  Trust me, you’ll be transported to New Orleans without having to do all of the driving.
Spinarizo at The Pizzeria at Terry’s Finer Foods
Not your typical pizza. This one features spinach, chorizo, and a cream based sauce. This neapolitan style pizza tops the menu of the food truck (Pizzeria Santa Lucia) turned brick and mortar restaurant inside Terry’s finer foods. 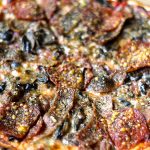 Pizza Mista from Bruno’s Little Italy
There’s a reason all of Little Rock rejoiced when the news of Bruno’s return to downtown was announced…the food is consistently great. New Bruno’s fans and old-time patrons are packing the house every night…and many of them are coming for pizza. The “Pizza Mista” is presented to you piled with sausage, mushrooms, pepperoni, beef, red onion, and black olives…definitely a contender for best pizza in the city.
Rabbit Gnocchi at Natchez
Chef Alexis Jones has developed quite a specialty for gnocchi dishes, but none compare to the rabbit. Part of Natchez’s rotating menu, this features braised rabbit, gnocchi, and a cream based sauce. Grab it quickly if you find it on the chalkboard menu. 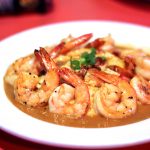 Shrimp and Grits from Maddie’s Place
You’ll find shrimp and grits on hundreds of menus across the South, prepared hundreds of different ways. But you don’t often find it executed as well the version you’ll get at Maddie’s. Perfectly cooked shrimp sit upon smoked cheddar grits with a delightful andouille sausage reduction. Every bit of this dish works…and reiterates the fact that Brian Deloney is one of Little Rock’s finest talents.
Bacon at The Beast
How does house-cured bacon from Freckle Face Farm sound? The combination of sweet and salty flavors make this the best bacon in all of Little Rock. And that’s saying something.
Mortadella Waffle from Waffle Wagon
Waffles are not all sweet, in fact some of the best waffle’s coming out the window of the Waffle Wagon food truck are savory. This waffle features a savory batter, stuffed with mortadella from H.A.M. and Havarti, then topped with dijon mustard and cornichon. The result is like an ultimate grilled cheese sandwich in waffle form.