Our kids love it when we have a @raduno_lr night. They have a great kids menu.
These birria burritos (birritos?) from MC Burritos were 🔥🔥. Can’t wait to pick up more.
Our crew spent some time checking out @topdoglr in downtown yesterday. We found some great dogs, burgers, and cheesesteaks (pictures here).
Keeping it simple today with a catfish plate from Burge’s.
Scored some major dad of the year points by picking up a pack of @loblollycreamery macarons to go in the kid's stocking.
Today is the last chance to get @lowivycatering food in Little Rock before they move out of state. Catch them at @therailyardlr at 5.

Honestly, I’m a little surprised it’s taken us this long to get a dedicated burger truck in central Arkansas. While food trucks are traditionally hotbeds for culinary creativity and ingenuity, there’s something to be said for sticking to the classics, and no one is going to argue with a hot, greasy, slightly sloppy burger. And so we welcome BASH Burger Co. to our growing fleet of food trucks…a no-nonsense, burger-flipping, deep-fried food fest compressed in a small, bright blue trailer parked in a Benton parking lot off Military Road.
I was in the area recently for lunch and the “call of the burger” began to gently sound within my ears. There was no avoiding this gently coaxing, and we soon found ourselves parked outside BASH’s window.
Burgers are divided into the “build-your-own” variety and around eight preconceived specialty options ($8-10 each). If you’re going to try your hand at burger construction, you begin with their 1/3 lb. patties made with freshly ground chuck (single $7, double $10, triple $12). From there, you can layer on toppings to your heart’s content. Many of your condiments are offered at no added charge, but a few (sauteed mushrooms, onion rings, deep-fried tomatoes, bacon, fried ham, BBQ pork) are offered for a small fee ($0.50 – $1). All burgers are served on freshly baked buns from the local bakery, Arkansas Fresh.
The “specialties” bring a bit more flare to this burger show. Proven topping combinations make an appearance here…like the “Early Riser’s” bacon, fried egg, and cheese. The “Pitmaster” tops its beef with pulled pork, bacon, cole slaw, cheddar, and BBQ sauce. They’re selling a healthy number of “AOMC (Art of Men’s Cuts)” burgers. It probably has something to do with the fact its topped with bacon, avocado, ranch, cheese, and an onion ring with a fried egg in the center.

I could not escape the “Korean BBQ” burger. Always a sucker for more kimchi, this was an easy choice…as this burger comes dressed in BASH’s own house-made version. They also add bacon, a Korean BBQ sauce, and (surprisingly) peanut butter. It was an excellent array of flavors and textures. The sweet and sour, slightly spicy kimchi plays well with the salty bacon. The peanut butter is subtle…not overly sweet, as might be expected, but adds just enough richness and nuttiness to really make the flavors sing.
We also snagged one of their standard burgers…a single with lettuce, tomato, pickles, and cheddar. Here, we were really able to appreciate the slight crisp they put on the outside of the beef patty. It’s a burger that plays for the “thin patty” team, but we never felt it to be dry or overcooked, but did feel it could have perhaps used a touch more seasoning. The veggies and toppings tasted fresh, and overall, BASH puts out a respectable standard issue cheeseburger. 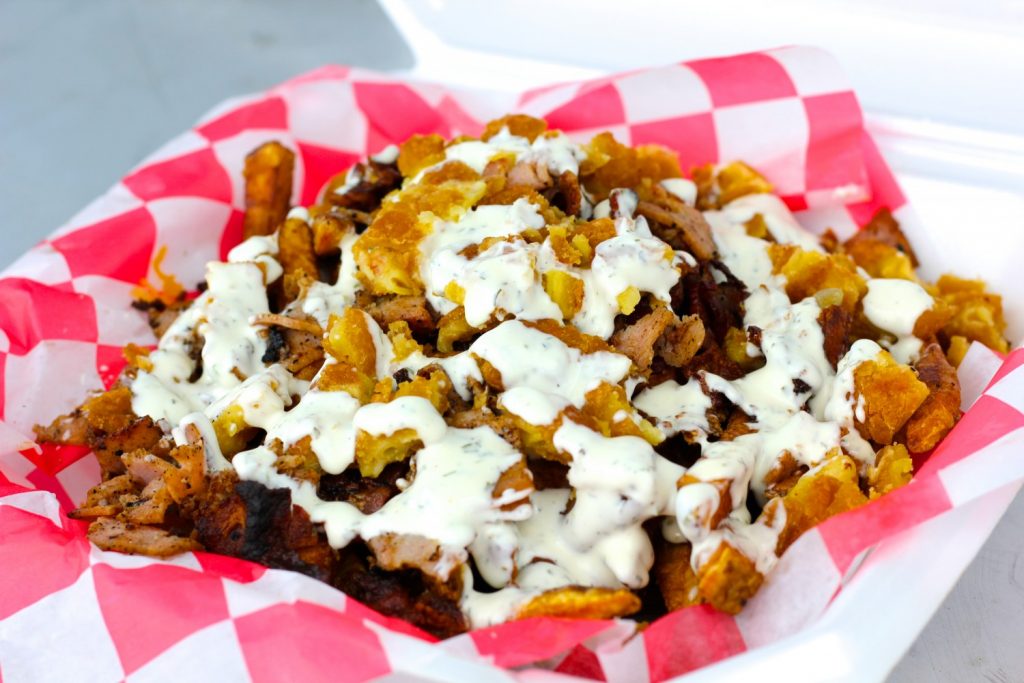 We inquired about any other popular side items we might try while visiting. We were expecting, perhaps, some of their hand-cut fries, their deep fried pickles, or their signature beer-battered onion rings. Instead we were turned on to an “off menu” gut bomb so big and so deep-fried that lesser men’s cardiac arteries cower in fear at the mere mention of this dish. The “Kennedy Fries” are a whopping portion of fried potatoes covered with turkey, crispy bacon, colby jack cheese, fried mac & cheese bites, and doused in house-made ranch dressing. This is not a dish you eat casually. Nor something you’d want to attempt is you’re planning on doing anything remotely physical for the rest of the day. This is “plop-yourself-on-the-couch-and-finish-an-entire-TV-series-on-Netflix” kinda food.
We left pleased with our grub from BASH. I’m not in this corner of Benton too often, but when I do return, BASH is certainly something I’d be happy to consume again. Hop on down there as see for yourself what the BASH team has concocted.
BASH Burger Co: 2122 S. Military Rd., Benton, AR. 72015. (501) 602-0500. experiencebash.com – Facebook – Twitter: @ExperienceBash – Instagram: @ExperienceBash

5 Shifts in Restaurant Real Estate for 2022