These Friday only pretzels from @communitybakerylr make the week worth the wait. Especially the jalapeño version.
The folks over at @memestwistedpotato are cooking up some really fantastic vegan food. These vegan steak tacos were some of the best we have had.
Celebrating #negroni week with this rum Negroni at @petitandkeet.
We are excited to welcome @presswaffleco to #SoMaLR. Stop in and try some this weekend, it is delicious.
Fantastic dinner last night at @table28lr from one of the best chefs in the state.
Finally got a chance to check out @grilledsandwichcompany. This brisket grilled cheese is ridiculously good, everything you could want in a sandwich. They are out at @thepaintfactorylr today for lunch, check them out there or at one of their other sets.
They say not to judge a book by its cover, the same can probably be said about beer cans. A great design does not make a great beer, however there are some really amazing can designs out there that make us want to pick them up anyway.
In just casual conversations with various liquor stores, well designed cans have higher sales. In Arkansas several breweries have cans including Lost Forty, Ozark, Diamond Bear, Core, Flyway, and Fossil Cove, and we know that Bike Rack and one other brewery we cannot name right now are working on them. Further several breweries have crowlers (basically large cans that are filled in store) that absolutely can be designed well, as you will see later.
Some breweries go above and beyond to design their can including intricate wood carvings as bases (like Lost Forty). Others however choose to just pick what appears to be a generic template and call it a day (like these preliminary Bike Rack cans).
Most of the time if a brewery puts the effort in to make one good can design, then all of them are generally good. With absolutely no regard to taste (although we regularly drink them all) here are our favorite Arkansas beer can designs. 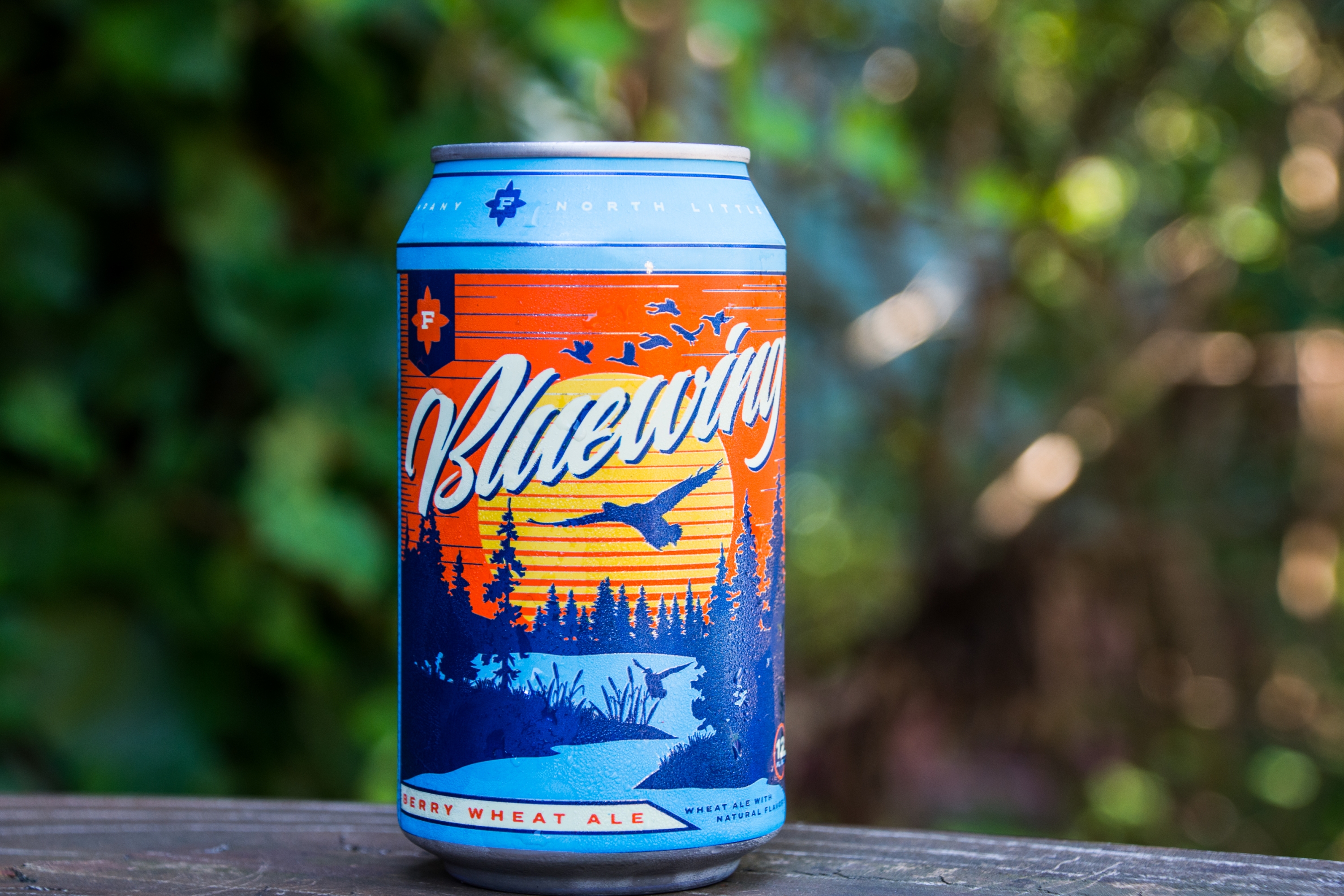 Flyway Bluewing
Flyway Brewing is a bit of the new kid on the block in terms of cans (they just released this week). However they came out swinging hard with the Bluewing can. It is colorful, retro, and overall well designed. It falls in with a very retro art style that we love and feels perfect for sipping on at the beach. I have seem a peek at some preliminary designs for other beers and they are all just as beautiful and well crafted. Flyway should do well in this area. 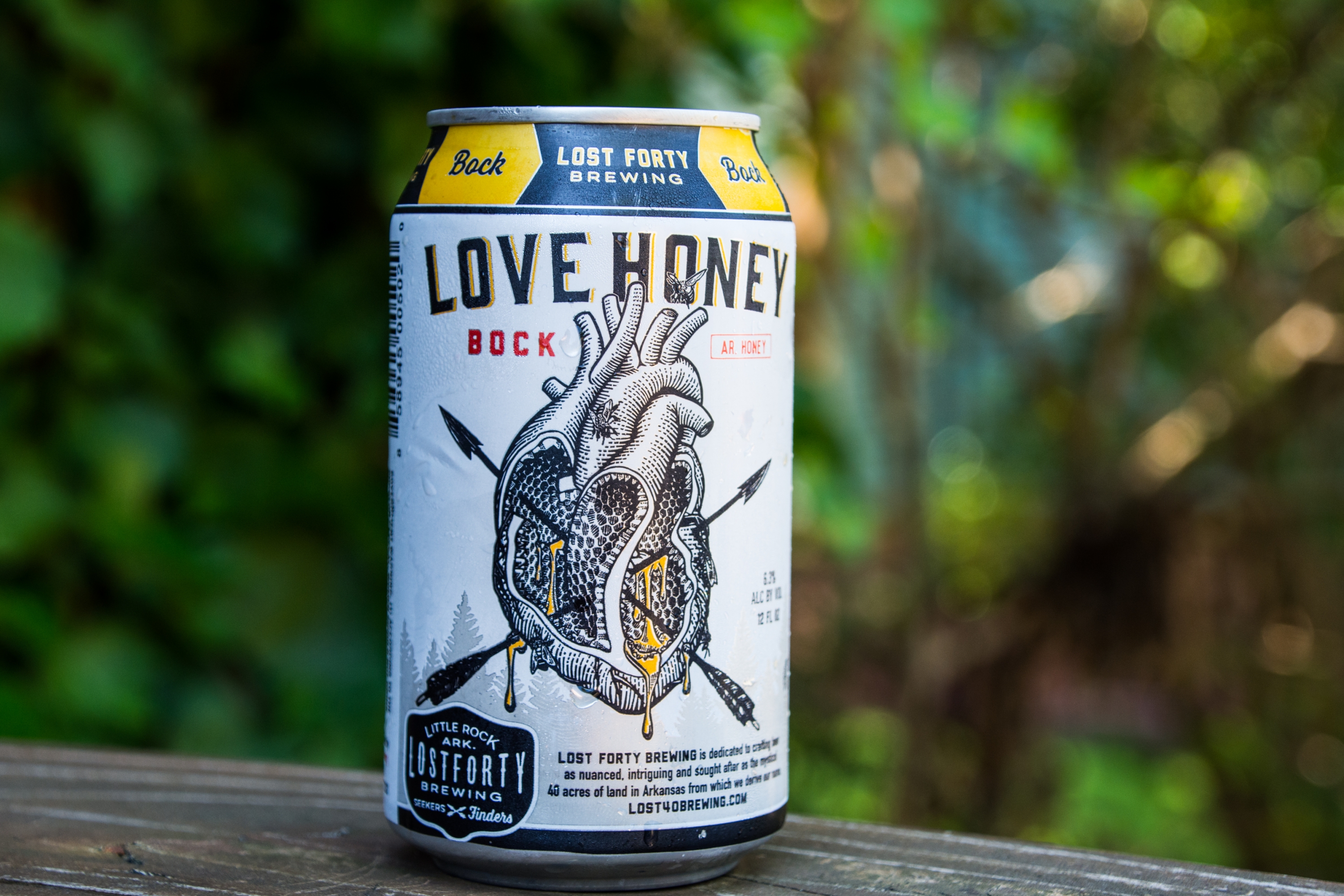 Lost Forty Love Honey Bock
Lost Forty has a ton of great can designs, the newest Look-See Hefe is gorgeous for example. For me though it is all about the OG, the Love Honey Bock. I love the tight intricate details in the design. It is very carefully designed and beautiful. Unlike some of the others, it is oddly minimalistic and lets the well crafted illustration stand on its own. If you want to see how beautiful this really is, swing in the brewery sometime and look at the wood carving that served as the original design. 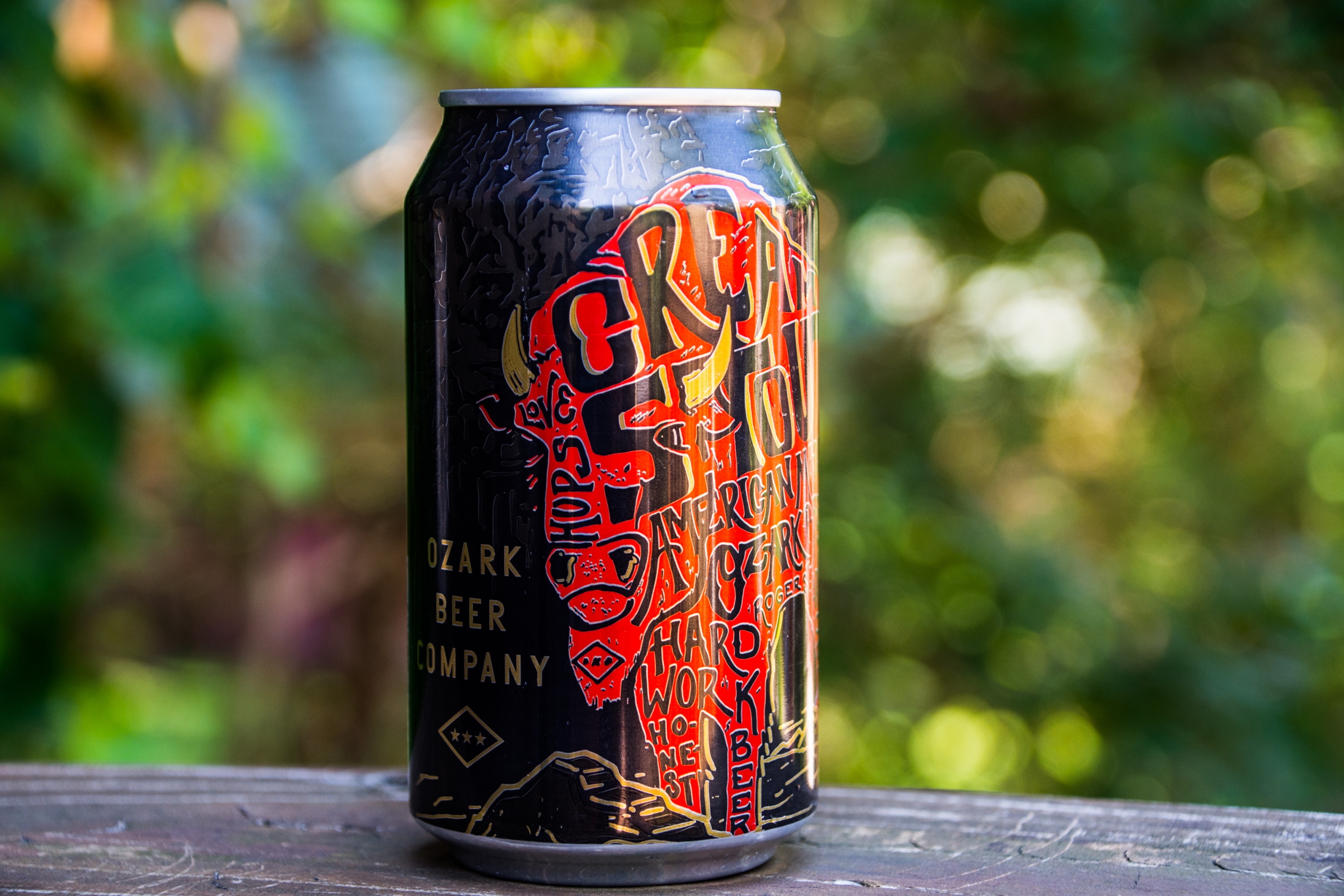 Ozark Cream Stout
Ozark Beer Co has very beautiful designs with this, the Pale Ale, and the Golden Ale. In fact it was almost a toss up between the Cream Stout and the Pale Ale. Still there is something about the Cream Stout that I love, maybe it is just the beer itself which is my all time favorite in the state. The can designs are beautiful, I love the integration of words within the the design and how the find creative ways to work it into the overall design. I love a beer where the design stands prominent like Ozark’s. I can’t wait to see what they design next.

Fossil Cove Crowlers
You can’t get it in Little Rock, but Fossil Cove’s designs are amazing. They have several beers designed in the same cartoonish style, but it was their Crowlers for some reason that jumped out to me. Maybe it is because everyone else seems to half ass their Crowler design so much, but it is beautiful. Their cans in general tend to tell a story of some sort, they are just fun to look at and I try to get my hands on a can every time they roll out with a new one regardless of the beer inside. Now if they would just get a distributor in Little Rock.

The World Cheese Dip Championship is Back for 2021