Menus get changed at restaurants all the time for various reasons. Sometimes it is flavor profiles of the season (regardless of which season Arkansas Weather actually wants to pretend to be), sometimes it is the availability of local produce, but usually it is just to do something new and keep things fresh.

Then there is the rare occasion that a menu comes together with a rich backstory that it is best to just pull up a barstool and hear how your delicious cocktail came to be. It is this interaction and banter between bartender and consumer that makes a bar special, and different than say, a tap room where you often get your drink and quickly get out of the way.

It wasn’t until about halfway through South on Main‘s menu that the story started to unfold when I came across a cocktail named The Hierophant. First I had no clue how to pronounce it, and secondly have never come across it before on a cocktail menu, so it had to have a story. Turns out it did.

“The Hierophant has always been my favorite tarot card,” bartender Courtney Stowers explains shyly. “It is a trump card depicting a pope and is meant to symbolize wisdom. I have always wanted to put it on a cocktail menu, so when we were working on this menu I insisted that we name the drink that.”

The drink is made from mezcal, lemon, orange bitters, sugar, and Fernet Branca, something Stowers stumbled into while experimenting with hot totty styles after a cold. Like any good bar story it naturally begs a hundred follow up questions that lead to a hundred more.

Then we hit a drink called the Roasted Peanut Froggy. It is a take on the old tradition of putting peanuts in coke bottles, only this one also adds a bit of peanut infused Jack Daniels to give it wall all coke needs. I understood the concept but the name kept begging questions, so I asked head bartender David Burnette.

“While I was bartending in Nashville there was an old local bartender who loved coke and Jack. Everyone knew it and he was a huge personality,” Burnette tells us. “He had this voice that sounded like froggy from the Little Rascals. It was so well known that you could walk into most major bars in Nashville and order a froggy and they would always give you a coke and Jack shooter. I wanted to bring that into this menu.”

The peanut infused Jack on its own is very interesting, as is the countless stories of Froggy that could be told after a few of his namesake drink.

Then there is the cocktail called “A Pecan Walks into a Bar” which is gin, pecan syrup, lemon, sparkling water, chicory and pecan bitters, adelaide, and topped with candied pecans.

“So we started making a joke when we were playing with this cocktail and it started with ‘So a pecan walks into a bar…’,” Burnette laughs. “Unfortunately we never came up with a punchline for the joke, but we are hoping someone helps us out with that.”

Mixed into the menu are some old favorites that can tell tales of their own like the famous Sweet Potato Lemonade that has become almost famous around here. Then there is the Good Christian that has shown up here and there at South on Main parties and special concerts. This is the first time though that the pear brandy cocktail finally finds its way onto a menu.

There are a couple two that beg to have stories told. The very smooth drinking Raleigh’s Imperial Tea was easily my favorite of the menu. It starts with an earl gray infused El Dorado rum (that is amazing by itself) and works in PH Alchemy pineapple rosemary shrub and sparkling water. It is served in a beautiful wooden goblet that makes it even more amazing.

Stop into South on Main and check out the cocktail menu which is out now. Better yet pull up a barstool and get to know some of the stories and history behind the drinks. Yes a bar serves cocktails, but the stories and interactions are the real reason we love bars. 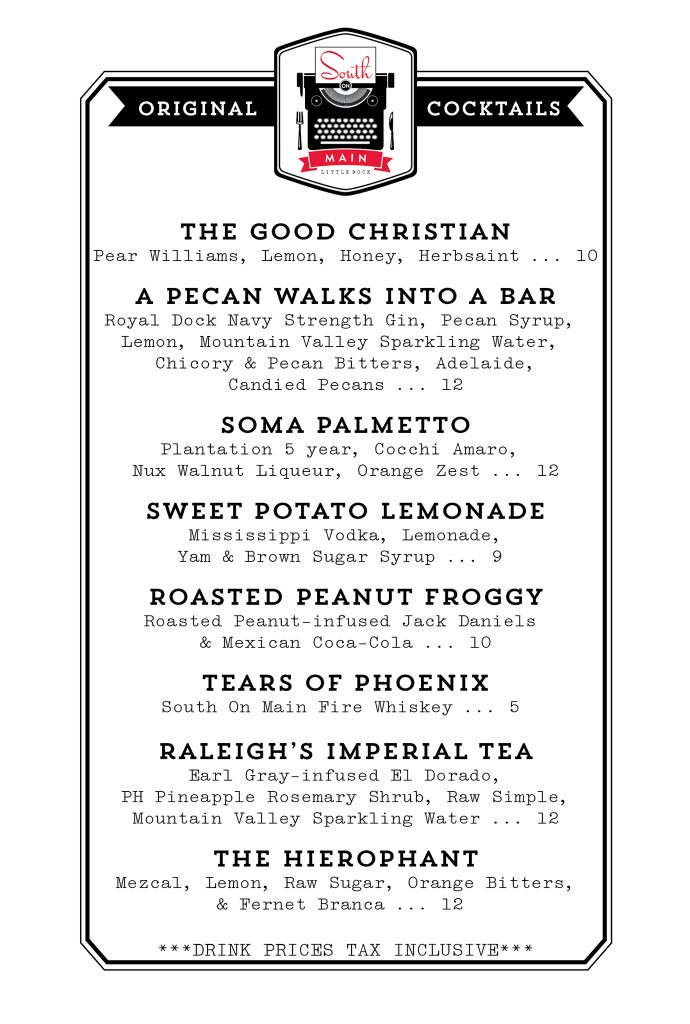