The Monkey Burger Is A Big, Beautiful, Mountain of Meat

Burger lovers will often divide their “mistress of meat” into two categories — thick vs. thin. But in Arkansas, it seems, the burger gods demand that we consider another burger species in our classification models…the insanely large, mammoth burger. Most of you will be familiar with the infamous hubcap burger from Cotham’s Mercantile in Scott…and, of course, the sickeningly gigantic double, triple, and (*gasp*) quadruple hubcaps they also sell. And Cotham’s makes a respectable burger — its size is not merely some gimmick to entice the uninitiated to attempt consumption of such a large item. It’s a darn tasty burger all around. But another recently discovered challenger now lays siege upon Cotham’s colossal throne…and it’s certainly worth your time seeking out.

Nestled in the quiet, relatively undisturbed neighborhood of “College Station”, just south of the Little Rock airport, you’ll find a hidden gem of a restaurant named Monkey Burger. You could easily pass by the place 100 times and never think to stop in…if you didn’t know about the burger bliss that lay waiting inside. But stop…go inside and order a burger. And for the love of beef, bring your appetite.

Looking over the menu at Monkey Burger, it’s relatively clear they are focused on their burger offerings, as essentially half of the menu lists the various ways they might be ordered. Hamburgers vs. cheeseburgers. Single, double, “jumbo”. In a combo or alone. But if you’re going to make the trip to Monkey Burger, I suggest you start with their namesake, the “Monkey Burger.” 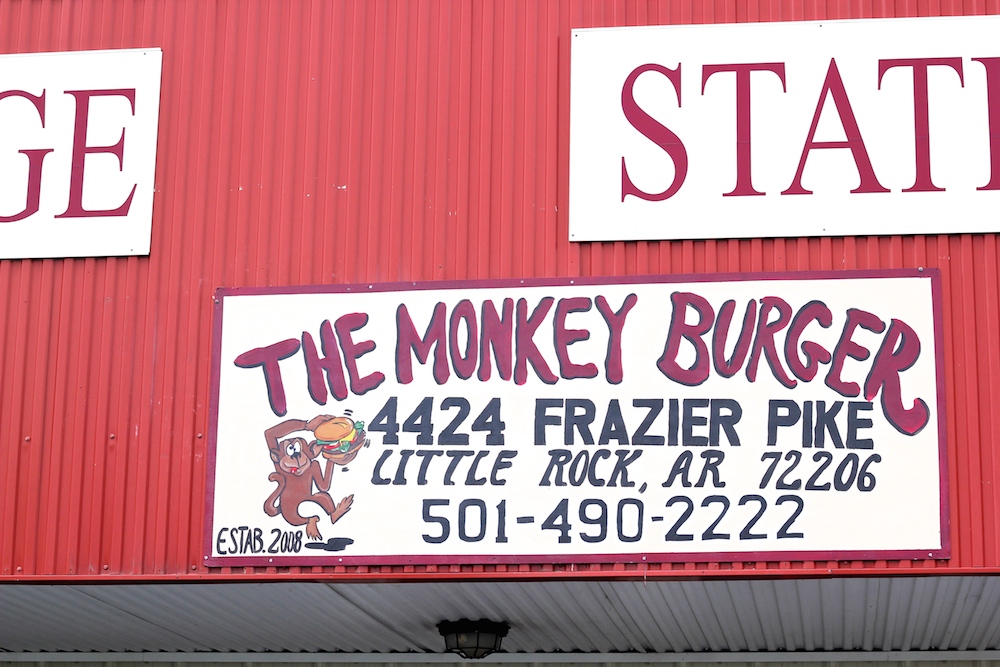 The menu provides no description as to what exactly the “Monkey Burger” is. Just know this…it’s enormous. A friend told me to come hungry, and expect a big burger, yet I was still surprised by its girth when it was placed on our table.

The Monkey starts with two large patties of beef. How large you may ask? I’m not quite sure…maybe a pound each…maybe more. I asked the owner…her response: “Oh, we don’t ever measure them…we just pat ‘em out until they look right. They may vary a little every time.” Regardless they’re big and thick and delicious.

The mountain of meat is joined by other classic additions…cheese, pickle, mayo, lettuce, red onion, and tomato. Ketchup available on the side. I’d suggest going with the “basket” combo which comes with fries and a drink. I highly enjoyed the fries, too. They’re not the hand-cut variety, but they batter dip them before they throw them in the fryer. They come out crispy and golden brown.

If you have a death wish, you could attempt the “Maniac Monkey Burger.” It comes with three patties and is topped with bacon, egg, and cheese. It may also require you to sign a wavier before they serve it to you.

And the prices at Monkey Burger are almost unbelievable. The burger will only cost you $6.25. Adding a drink and fries brings it up to only $8.40. There’s not a better bargain in Arkansas, I promise you.

To all you burger crusaders, hellbent of sampling every respectable and recommended burger in Arkansas…get in the car and hop on down to Monkey Burger. It’s a big, beautiful monster-sized burger…but it’s good to the last bite.

The Monkey Burger Is A Big, Beautiful, Mountain of Meat