On the surface, this was a million-dollar idea. And Taco Bell knows a thing or two about million-dollar ideas (see the Doritos Locos Tacos). Take one of the world’s most beloved breakfast cereals, Cap’n Crunch Berries, and magically incorporate them into hot doughnut holes filled with milk-flavored icing. SHUT UP AND TAKE MY MONEY! Right? It’s a fool-proof idea, poised to change the donut-cereal-pseudo-Mexican fast food world forever.

Taco Bell, admittedly, is a long-time guilty pleasure of mine. You don’t need to try to convince me how (generally) crappy the food is there. I know this…yet I still hear that big bell ringing from time to time, enticing me to “think outside the bun” and “live mas” …and I end up finding myself in their drive-thru more than I’d like to admit. Furthermore, I’ve already developed a fondness for TB’s other doughnut-like product…the “Cinnabon Delights” coated with cinnamon and sugar, filled with cinnamon roll frosting.

These new Cap’n Crunch Delights were destined to be a raging success. The only problem? They totally suck.

A few bites into my 12-pack of Taco Bell’s latest sweet creation. My hopes, my dreams of a doughnut hole that would flood the earth with its glory…that was all shattered in an instant. I was $6 poorer and immeasurably more disappointed. 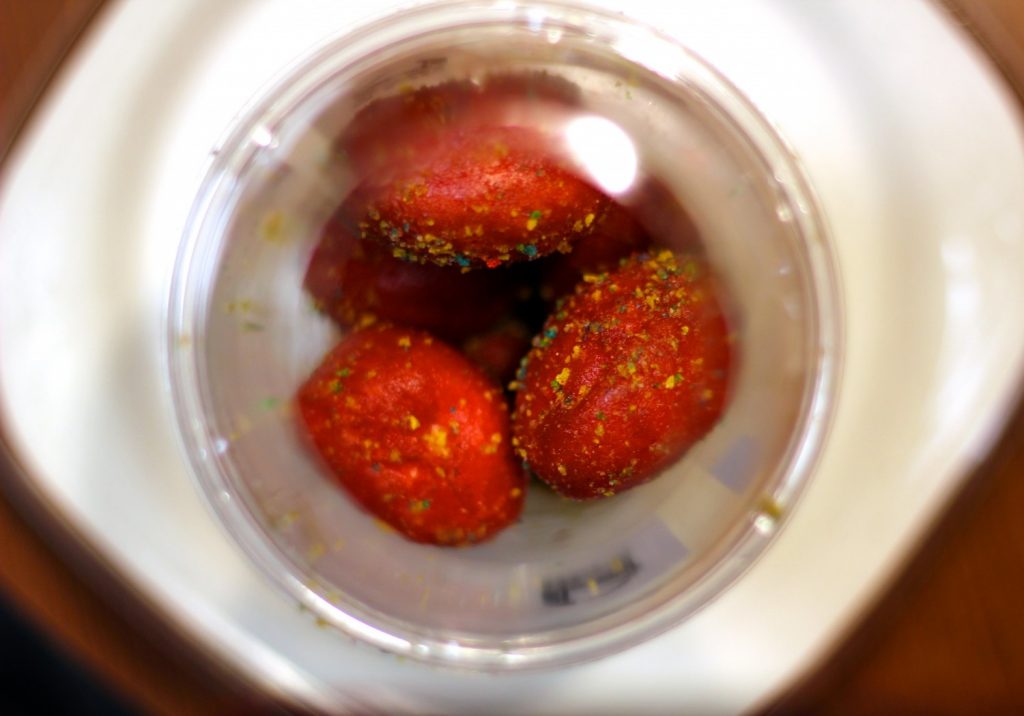 The issues were many, in fact. The minuscule flecks of rainbow colored dust coating these “delights” were essentially flavorless…and while they were supposedly fragments of the legendary Cap’n’s sweetest cereal, there wasn’t even a hint of Crunch Berry flavor on those balls. The bright artificially-red puffs of dough were incredibly oily, and one feels the need to constantly wipe off one’s hands off while eating. I understand the need to store these frozen and heat them to order…I’m not expecting fresh pastry from Taco Bell any time soon…but these felt particularly pre-processed, previously frozen, and utterly lifeless. Even the filling inside — while it did taste surprisingly like (as promised) “milk” — was lacking flavor, and believe it or not, could have stood to be a little sweeter.

Alas, I’ll do my best to remain content with my standard Beef Meximelt, Mexican Pizza, and Soft Taco Supremes. We all recognize that within the Taco Bell arsenal, there are very few new, unique flavors, and most of their “special items” are simply the same old ingredients, repackaged, and rebranded into something potentially more interesting. But at least The Bell continues to keep America on its toes…and that’s something I will always respect. I still love you, Taco Bell. Always and forever.