It was the first time in my life that I actually cringed as I ordered my food.

There I was, strolling though Target around 9:30 pm on a Saturday night, doing some late night shopping. Hunger struck me…and I remembered the vile creature that Pizza Hut had just unleashed on America.

I looked them up on my phone and dialed up the nearest Pizza Hut to grab a take-out pizza. First call, no answer. They were definitely not closed…so I should have taken this as a sign. But I persisted and called back.

“Thanks for calling Pizza Hut. What can I get for you today?”

“Yeah…can I get that hot dog pizza?” *cringe*

It dawned on me at that moment. The ridiculousness of it all. The absurdity. The grotesqueness of what I had just ask this man to serve me. A pizza. With miniature hot dogs rolled up in the crust. With a side of French’s yellow mustard for dipping. For a brief moment, I questioned my sanity. A grown man…with wife and kids, a respectable job, a college degree. Giving away my money for a pizza with hot dogs in it. I was embarrassed. Ashamed. And so…I cringed. And I still cringe today.

Yet the deed is done. And I live to report on it. 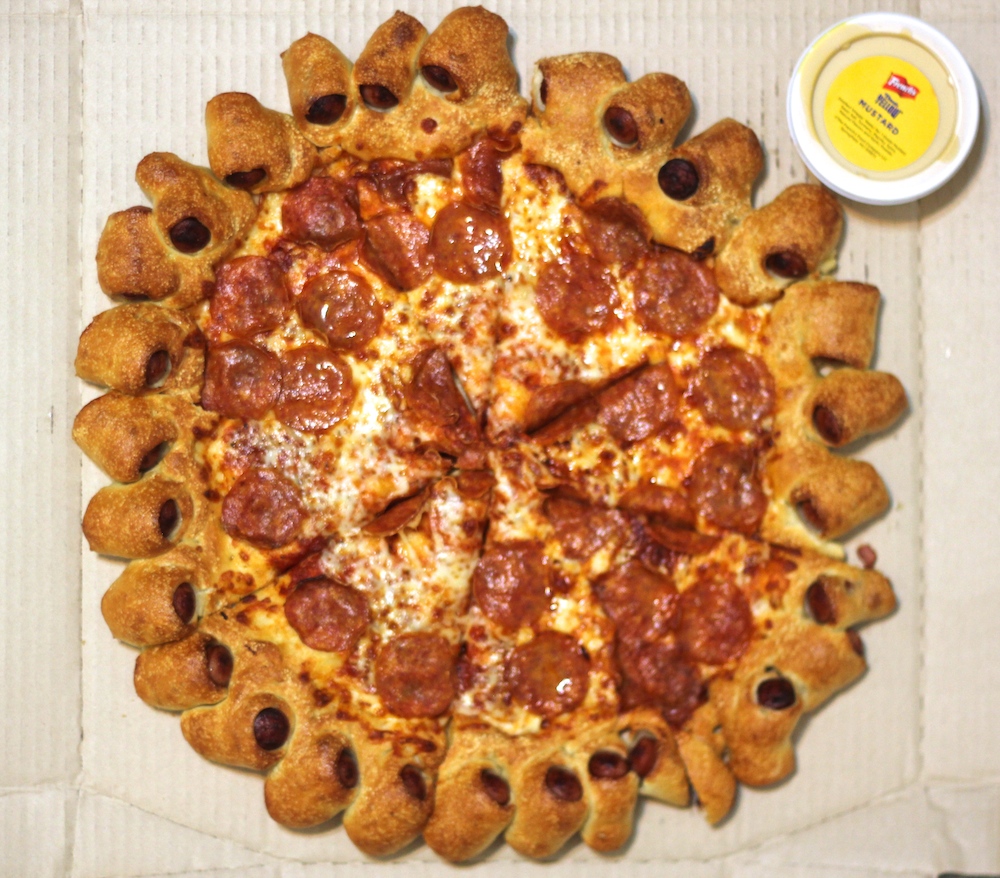 Yes…Pizza Hut has committed the most unpardonable of pizza crimes. Their “Hot Dog Bites Pizza” is being billed as “Part Pizza. Part Hot Dog. Total Game Changer.” Maybe that’s true…but what game are they playing at here?

You see, Pizza Hut is like that older sibling who would try to trick you into eating vile, inedible substances by hiding them inside more innocent, familiar, edible objects. You didn’t know any better…you were only 3 years old. Dog food inside the taco shell. Mud between two slices of bread. The entire solid bouillon cube hidden inside your Hot Pocket. No one at Pizza Hut actually thought this was going to taste good. No…they were just hoping to score a few bucks before America realized they had been duped into eating garbage.

Now you want the truth? The hot dog bits were actually the more pleasant part of the whole experience. They were vaguely reminiscent of those hot, buttered pretzels you’d get from the mall…only stuffed with mini-dogs. I swapped out the mustard for a bowl of ranch for dipping…and it was edible. The pizza itself was, in fact, the most dreadful piece of the puzzle. Squishy, congealed, low-quality cheese. Flavorless and scarcely found tomato sauce. And the grease! Let us not forget the grease!

If curiosity has also gotten the better of you…I’d recommend you act fast. I don’t imagine this will be on the menu for long. It’s been 8 years since I last ate at Pizza Hut…and it will probably be at least another 8 until I eat it again.

…unless they start replacing the crust with doughnut holes.