Each month, we’ll go inside the kitchen and bring you one of Chef Ken Dempsey’s personal recipes! Don’t forget to signup for our pop-up BBQ with Ken on June 14th

Everybody loves pie, right? Pie options are virtually limitless. We are pretty spoiled here in the South with an abundance of delicious options….strawberries, blueberries, key limes, lemons, cherries and on and on. Don’t even get me started on chocolate pies, peanut butter pies, chess pies, and coconut cream pies. Anyone hungry yet?

Although I love the sweet pies, and I do mean LOVE them, when I hear pie, I don’t automatically think of a sweet pie. Savory pies carry a special place in my heart. A chicken pot pie is pretty comforting on a cold night after all, and my wife is a big fan of quiche. When you think about it though, the savory pie options are every bit as varied as their sweet pie cousins. A good crust recipe and some creativity, and you are in business!

For this month’s Soulful Gourmet recipe, we are going to borrow from our English friends and modify to bring a little southern flare to it. This recipe for Arkansas Peasant’s Pie is as humble as its origins, but the flavor is far from it. I love to smoked brisket, but I’ll be the first to admit it’s a huge time commitment. Feel free to substitute some smoked pork or a smoked chicken if that’s your thing. I have to insist that you make your own crust though. I know, I know…they sell those pre-made crusts in the store. I promise you though, a delicious homemade crust can make or break a pie. Sweet or savory.

Like I mentioned above, a savory pie recipe can be adapted pretty easily to contain your favorite ingredients. For this pie, I used sour cream and onion mashed potatoes as the bottom layer. Typically, this is the top ingredient in a peasant’s pie, however, having the mashed potatoes on the bottom helps keep each slice in tact. On top of that is brown gravy with onions and red bell peppers topped with slices of a 13-hour smoked beef brisket. Enjoy! 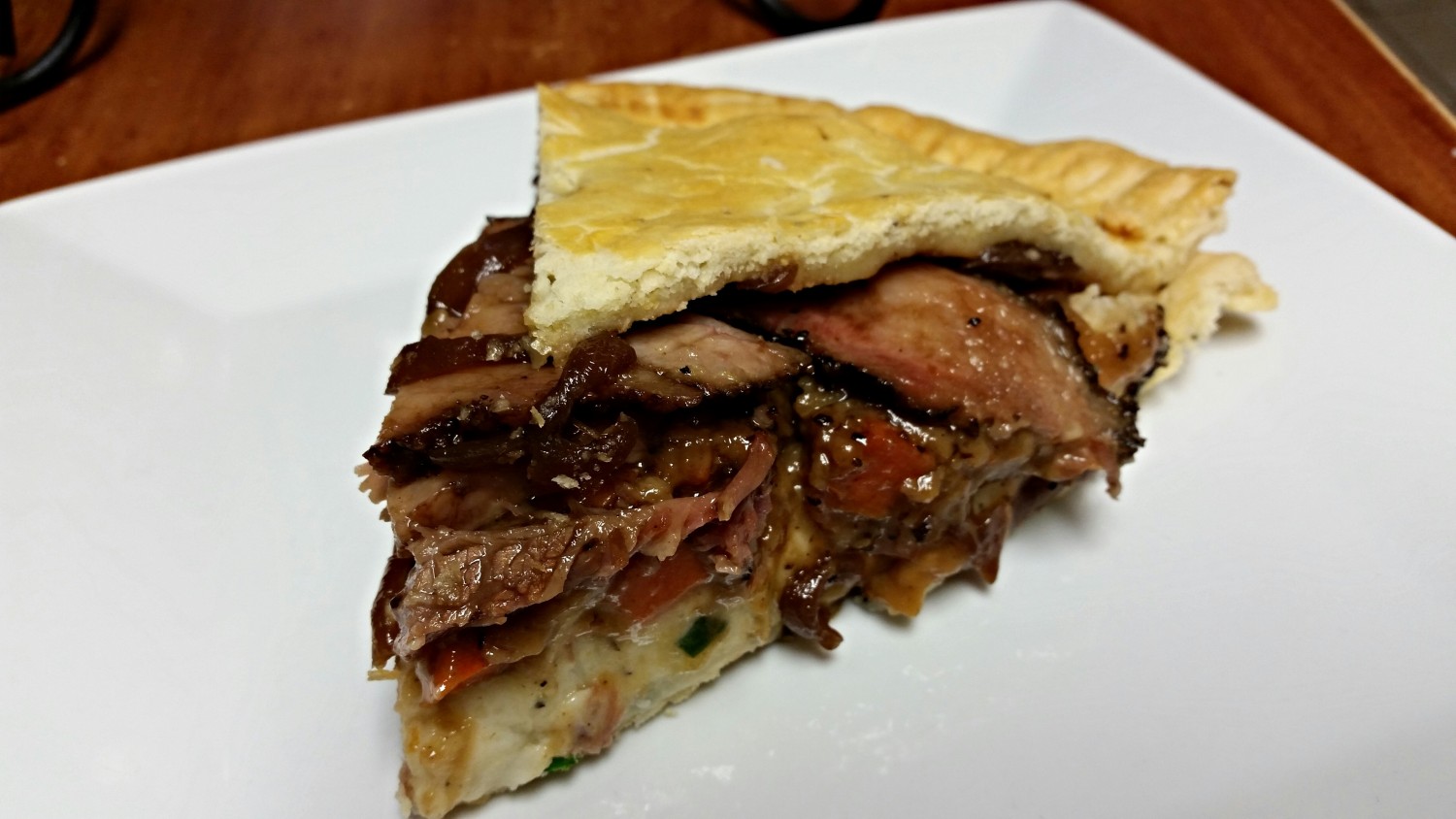 Directions:
1. In a large bowl combine flour, salt and pepper. Cut in butter with fork until mixture resembles coarse meal. Stir in ice water, a tablespoon at a time, until mixture forms a ball. Wrap in plastic and let rest for 30 minutes.
2. Roll ½ of the dough out to fit a 10 inch pie pan. Place crust in lightly greased pie pan. Press the dough evenly into the bottom and sides of the pie pan. Save the other half for the top of the pie.
3. After you have the pie assembled (potato layer, gravy/onion/pepper layer, brisket layer), place the other ½ of the rolled dough across the top.
4. Pinch the sides of the crust to seal the pie.
5. Slice approximately 6 quarter-inch slits in the top of the crust.
6. Brush the entire top of the pie with an egg wash (1 beaten raw egg with a tablespoon of water).
7. Bake at 350 for approximately 30 minutes or until the crust is a golden brown and cooked through.

Directions:
1. Combine boiled and peeled russet potatoes with all other ingredients and mash with hand masher or hand mixer (I use my Kitchen-Aid with beater attachment) until fairly smooth. DO NOT over mix.

Directions (makes appx. 2 cups):
1. Melt butter in a saucepan over medium heat.
2. Add bell pepper and onion and sauté until tender.
3. Add flour and whisk together, making sure to whisk all visible lumps.
4. Add salt and pepper.
5. Cook over medium heat for 5 minutes or until flour starts to brown.
6. Add beef broth slowly and stir constantly.
7. Continue stirring until gravy boils and thickens.

Directions:
Smoking meat is a pretty personal thing in which most pit masters feel pretty strongly about their particular method. There are literally dozens and dozens of different ways to tackle this. I experiment a lot with my brisket, and through trial and error, have come up with a method that works best for me. I’m not going to try to instruct you in this post on how to smoke a brisket though.
This particular pie doesn’t need a lot of meat, however, you probably won’t be able to find very small cuts of brisket. That’s not a big problem at my house, because I love to eat brisket in all its forms. This is the perfect time of year to fire up the smoker and start your own back yard experiments. If you want to learn from the master, pick up a copy of Aaron Franklin’s new book “Franklin Barbecue: A Meat-Smoking Manifesto.” It’s a great read and will get you started on your brisket journey.

Ken is an award winning BBQer and chef. Currently he is the chef at Arkansas Surgical Hospital, previously Ken has worked with E's Bistro, Ristorante Capeo, and Maumelle Country Club.