Sustaining a burgeoning food scene requires, among other things, a diverse talent pool. Thankfully, Little Rock has a few fresh faces stepping up to the plate. This series aims to introduce up-and-coming chefs and find out what makes them tick.

It’s a rare thing when a successful, beloved restaurant with a steady stream of regulars hands over the reins to a 23-year-old upstart chef who was working at Burger King just five years ago. Even more rare is when that move works handsomely, resulting in a menu brimming with quality and a level of worthy buzz that has people excitedly talking. And yet, that’s what we have with new executive chef Cody Rudd at So Restaurant in Hillcrest.

Rudd was working at Burger King while taking courses at Pulaski Tech’s culinary school, but quickly left that job to work under Stephen Burrow, who was at Forty Two at the Clinton Presidential Center. A tireless worker, Rudd held that job while also working in turn at 1620 Savoy and at So Restaurant as a sous chef under Casey Copeland.

“My last semester was a 24-hour semester,” says Rudd. “So I had four six-hour labs and two jobs, and it was anything but easy. But it really gave me more than a jump-start. I moved at a really quick pace.”

Rudd made enough of an impression during his first stint at So Restaurant that owner Jeannie Smith hired him when Copeland departed for The Avenue in Hot Springs. Rudd quickly learned that being an executive chef doesn’t mean you can change everything, especially at an established restaurant.

“There are a few things I can never touch, you know, the beef brochettes, the seafood fondue, the chocolate sack, the tres leches cake, and I’ve grown to love them all,” says Rudd. “As a chef, you can’t just cook for yourself. Not everybody has a chef’s palette, you can’t just pray that everybody in Little Rock is going to love sweetbreads just because you cook them.”

Rudd started as So Restaurant’s executive chef in November, in the middle of the busiest season for the establishment. After getting through the crush, Rudd began working on making the menu his own. The change to highlighting simple, fundamental flavors is apparent; his roasted root vegetable appetizer is a gorgeous celebration of natural flavors and presentation. Rudd says making updates to classic dishes is his favorite technique.

“I like the idea of them and how they were done when they were first created,” says Rudd. “What makes it fun for me is brightening them up, making them fresh, doing some cool stuff with them. I like to take a modern play or touch to classic dishes.”

Of course, you can’t be a chef at So Restaurant without addressing wine. The restaurant has one of the best wine collections in town and has been honored by Wine Spectator for its wine list every year since 2011. That means Rudd has to keep wine in mind with every dish he creates, a challenge he says he has found enjoyable.

“Learning how to pair food with wine, I feel like I’m in a candy shop,” says Rudd. “It’s fun, it’s like going to Toys-R-Us for me. It’s really accelerated my capacity. The knowledge I’m getting from doing these wine dinners and working with our sommelier, it just makes the menu that much better.” 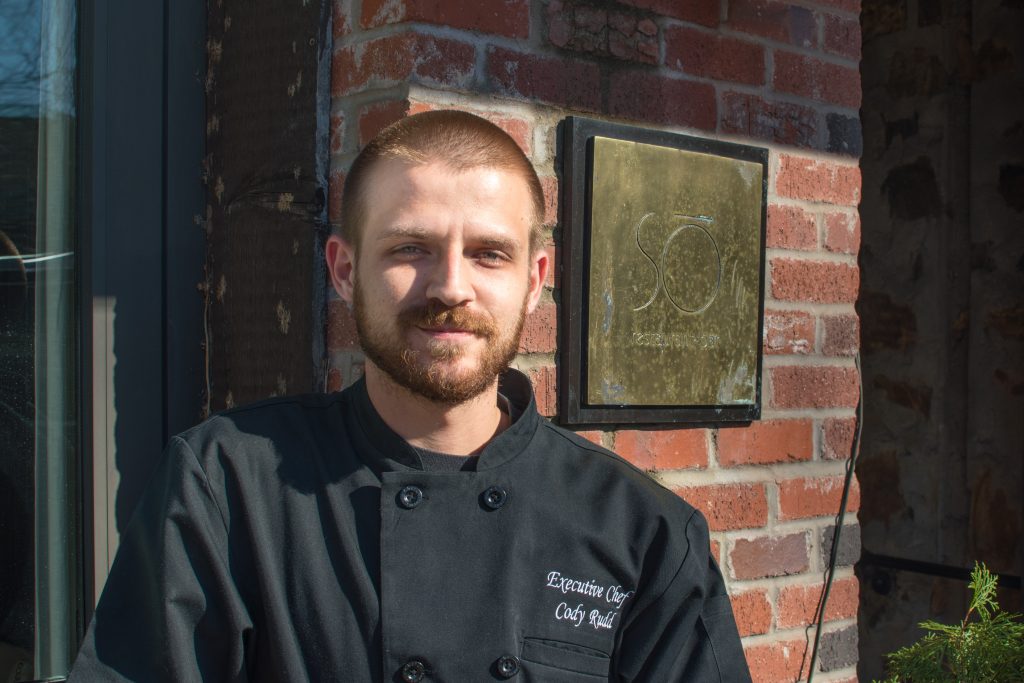 Rudd and his team now put out a special wine dinner on the last Tuesday of every month to highlight a particular vineyard and allow staff to flex their creative muscles. Rudd is extremely proud of his team, going out of his way to point out which dishes on the menu individuals in his kitchen helped shape. There’s no doubt that Rudd can cook with a talent beyond his years, but it’s his fierce devotion to those who work for him that really show just how mature he is.

“When I hear them say that they have a leader instead of a boss, that’s honestly better than any review that could come in. If I didn’t pay attention to them and just focused on what the public thinks about the food, it would crash, it would all fall apart. I’m not going to let that happen.”