For four years, Brad Kossover and his hot dog operation, Green Cart Deli, ruled the hot dog scene in central Arkansas. Stationed primarily in Conway, Green Cart amassed a large and loyal following due to its superior product, intriguing hot dog combinations, and charismatic owner. Kossover made occasional appearances in Little Rock, as well…joining up with the growing food truck fleet in this city, always making a strong impression on customers when he visited. Folks were flipping for his hot dogs. And for good reason…they were awesome.

But Green Cart Deli abruptly and mysteriously went dark in 2014, and many loyal fans were left wondering if they’d ever see their favorite hot dog slinger again. Losing Green Cart was not only a big blow to the Conway food scene, but the central Arkansas food truck/cart movement in general.

But there is reason to rejoice, Green Cart Deli fans! The cart is back and better than ever. More fabulous franks are in your future.

Green Cart Deli plans to make its triumphant return to Conway on August 29th from 11 am to 2 pm. They will be set up outside The Flower Booth, a floral shop behind Conway Commons, located at 810 Amity Road, Conway. 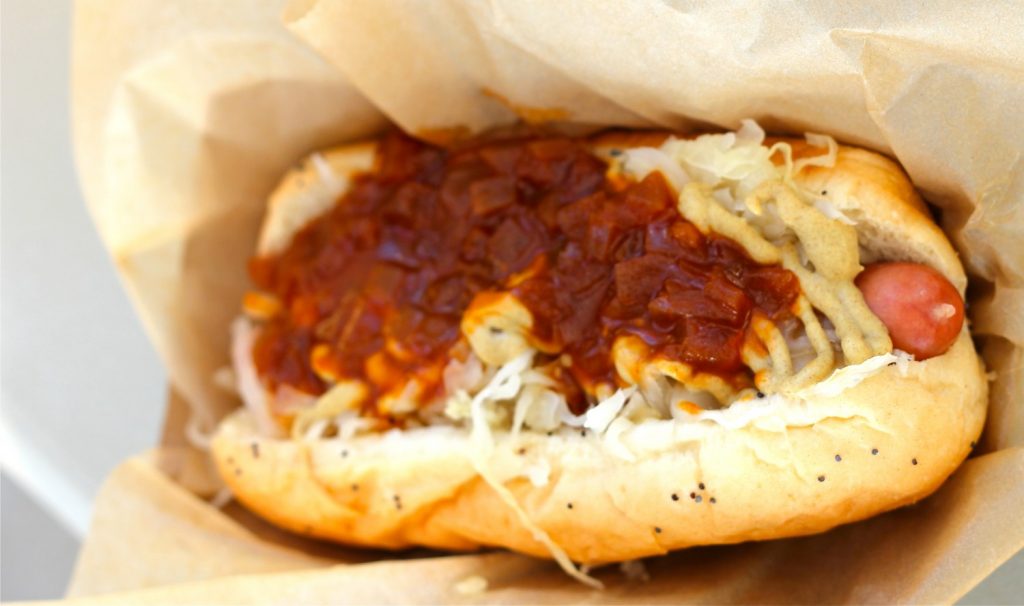 What can you expect to see from this resurrected hot dog vendor?  They’ll still have many of your favorite wiener combinations…the classic dogs that put Green Cart on the map. Don’t pass up the “Ranch Dog” with bacon, house-made slaw, fried onions, pepper strips, and house-made chipotle ranch. I’m telling you…it’s a fantastic dog. Other favorites include Green Cart’s riff on a Reuben sandwich, “The Bear”, with steamed kraut, relish, roasted caraway, shredded swiss cheese, and house-made Russian dressing. Everything served on their excellent poppy seed buns.

The folks behind Green Cart Deli promise only the highest quality ingredients. Reportedly, the team took a long road trip dedicated to finding the perfect frankfurter…driving from Chicago to New York City to find the right product. They settled on the all-beef franks from the Vienna Beef, Chicago-style hot dog company because they love the signature “snap” eaters get with every bite.

But beyond just serving hot dogs, Green Cart Deli plans to expand to a few new options. Menu is still in development, but you can probably expect to see a Chicago-style Italian beef sandwich at some point.

For a short time, Green Cart will only be operating on Saturdays, but expect a full-time operation within a few weeks. They are also taking catering requests. While they’ll likely be in Conway most the time, keep your eyes peeled for occasional visits to Little Rock.

Follow their progress and stay updated on locations through their Facebook and Twitter pages. And get hungry for some hot dogs…this one’s going to be good.

Your 2016 Little Rock Food Truck Checklist – Up For The Challenge?

Hear ye! Hear ye! The Legend Of The Excaliburger