This week in food news is best described as an identity crisis. We see 2 restaurants switch their name and one finally hang up the apron.

I loved the House, a Gastropub/Burger Joint located just off of Kavanaugh on Palm, when they first opened. My wife and I had spent a ton of time in the former coffee shop (Sufficient Grounds) that occupied the house-turned-restaurant, and so we gave the House a quick try very quickly after opening. These were the days before Big Orange or Hillcrest Artisan Meats, a quality gourmet burger was hard to find in the city and we quickly fell in love.

We went frequently for Sunday lunch for the first several months. Then one Sunday we walked up to the door and found it closed on Sunday. That is where the trouble started. The House became this shifting sands of changes attempting (I believe) to please customers and maximize profits. In the end it was the constant shifting that drove customers away and killed profits. We found inconsistent menus, wild fluctuations in hours, and a slow decline in overall appeal in the years that followed.

Some food writers in town like to beat a dead horse. They find something about to die and try to make a scene. There were some good times at the House. The last year was not one of them. They never found that identity they opened with, and yes you start to lose quality wait staff and you let some building issues go when you are trying desperately to keep the doors open.  The House has been dead for a while. This is just the funeral. That said we have already heard some rumblings that make us excited to see what is next in the building.

Here is the message from the House announcing:

Lulav (or is it Italian Kitchen today?) has announced once again that will revamp their entire menu and change the name. The restaurant changed ownership earlier this month and hired Donny Ferneau as a consultant, so the change isn’t entire unexpected. They will now be known as Cellar 220 and server dinner only. No word yet on the menu changes other than it will likely be “wine friendly” and use many fresh, local ingredients. Hopefully they stick with something for a while. We are still waiting on Ferneau to officially announce his new restaurant as well.

If you like restaurants with numbers in their name, then you will be pleased to know that RJ Tao will be changing their name to Cafe 5501 along with a menu change. The food will be shifting  from the Asian fusion to a more Americana style cuisine, and will drop the ultra lounge concept.

We will take a look at both of these changes in the coming weeks/month as the restaurants are re-introduced. 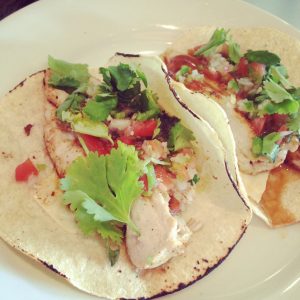 Finally this week we find a place starting to find their groove. Mugs Cafe has quickly become one of my favorite places. I work remote a lot and it is always a challenge finding a place with good coffee, good food, and a good environment. I love Mugs because owners Michael and Amanda Carpenter carefully sources his beans and they offer pour over, which provides a much better flavor than drip.

They are beginning to slowly roll out some new menu changes gearing up for beginning dinner service next month. This week Chef Steve introduced chicken tacos, which I found to be wonderful and spicy. Over the next few weeks they will be introducing a new burger menu which we hope to review shortly. It seems this is a place starting to really catch on, hope for good things in the future.

Mugs Cafe Brings Quality Coffee and Food to the Heights