All of us have our guilty pleasures when it comes to food. For me it has always been mac & cheese. So when our good friend Daniel Walker threw together his second food hack involving Mac & Cheese, we were all in.

The food hack is simple. Take a childhood super market favorite (last time was Totinos pizzas) and transform it into something else. In this case everything inside the box of original Kraft Mac and Cheese must be used in the dish.

Immediately I thought to separate the pasta from the powdered sauce. Since the pasta is essentially enriched flour I wanted to turn it into some sort of dough. I make a ton of pizza at the house. First time through I split it between pizza dough and tortilla shells (for a mac and cheese taco). Pizza was the better option. 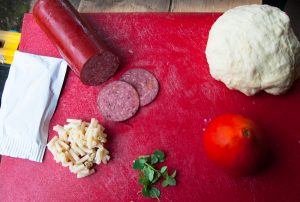 To start I lightly boiled the macaroni noodles until slightly soft, then set them out to dry. First time around I attempted to grind the noodles dry and that proved to be an awful idea. I set aside 1/4 of the noodles to use later and roughly chop the remaining before drying. 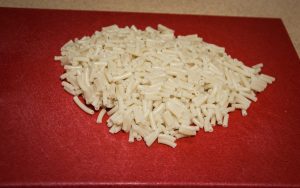 Next I go to work on the dough. I use my standard pizza dough, but leave out around 1/4 cup of flour to account for the pasta I will add. Once the dough has risen and the pasta is dried I begin working the chopped pasta into the dough. 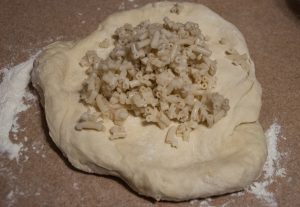 Next I go to work on the toppings. I make a very light pizza sauce to go down. Then I take butter and flour and make a roux. I then blend mix the cheese sauce with a 1/4 cup heavy cream and add to the roux. The idea here is to make a very thick cheese spread to go on top. 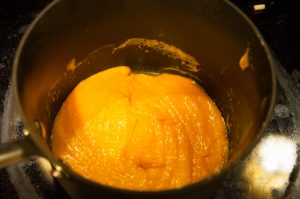 I take the remaining noodles and add them to some fresh picked basil and a little water. The idea here is to draw out some of the flavor from the basil into the noodles to top on the pizza. 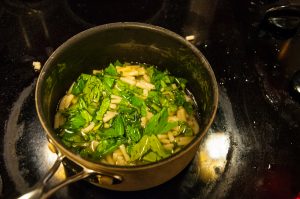 For the rest of the toppings I will add sausage and fresh garden tomatoes. 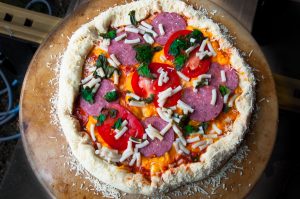 Once it is all assembled I move it to the grill. Grilling pizza is something I’ve began to get more interested in, it provides a nice crispy bottom that is hard to achieve at home without a pizza oven. 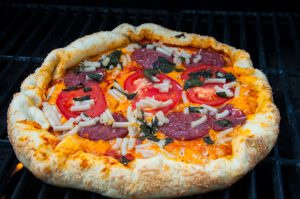 After 15-20 minutes on the hot grill, once the bottom has a good sear, pull it off. The pizza was surprisingly not bad at all, the macaroni noodles on top and inside the dough blend well with the cheese sauce. At the same time a bite of sausage and a taste of pizza sauce remind you that you are indeed eating a pizza. The garden tomatoes and basil help add a freshness to the traditional boxed dish.

Go vote for our Mac and Cheese pizza by liking the photo here. You can see all the other entries into the contest and vote for those here. 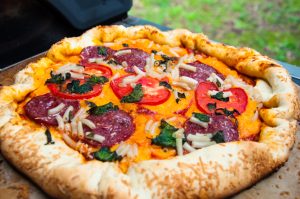