Recently, we reported on the coming Latin restaurant that was to be the newest addition to the Little Rock food scene and the latest tenant on Bowman Curve in west Little Rock — a location previously occupied by the short-lived Bill’s Country Kitchen, and several other restaurants before that. LuLu’s Latin Rotisserie & Grill opened its doors to the public last week and we were able to slip in to see what it had to offer.

LuLu’s comes to us from owner and chef, Heinz Koenigsfest, a native to Bolivia, alongside his wife, Kristin, who functions as manager at the restaurant. Heinz came to America seven years ago and has dreamed of opening his own restaurant since that time. In addition to owning restaurants in his native Bolivia, Koenigfest spent time training with Scott McGehee and John Beachboard at ZaZa in the past.

If you’ve been in the space before during one of its previous iterations, you’ll recall that it’s a rather small restaurant — one room, with around a dozen or so wooden tables, a central desk for take-out orders in the far back. The walls are now dressed with memorabilia, souvenirs, and photographs from all over Latin America and there’s lively Latin music streaming from the overhead speakers.

The menu is broken up into a few sections:

The restaurant’s specialty is “Pollo a la Brasa” or Peruvian-style rotisserie chicken. These are seasoned with a mix of herbs, Peruvian chile pepper, cumin, black pepper, and beer. It’s served in either 1/4 chicken, 1/2 chicken, or whole chicken portions (ranging from $7.50 for the individual plate to $24.50 for the family meal). Chicken is accompanied by a number of house made side items including French fries, fried yucca, fried plantains, black beans and rice, sautéed vegetables, or house salad.

You’ll probably want to nab one or three sauces for your chicken. There’s a traditional chimichurri…a green parsley and vinegar based concoction that you’ll want to slather on everything. And there’s two other house sauces traditionally found in Latin chicken rotisseries — a green sauce with parsley, mayo, garlic, and onion and a creamy yellow pepper sauce which uses a Peruvian pepper called “ahi amarillo mirasol”.

We also grabbed an assortment of delightful empanadas, three savory deep-fried pastries stuffed with either marinated beef, spinach and cheese, or chicken and cheese. At only $5.50 for three, it’s a bargain and an excellent beginning to any meal at LuLu’s. 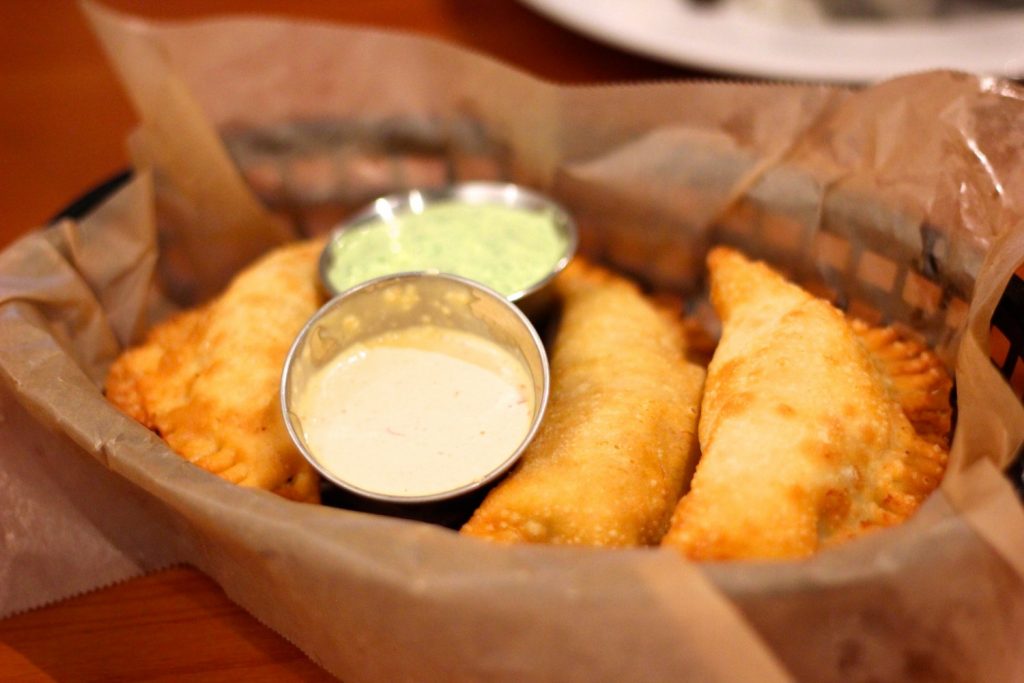 The remaining menu is filled with a handful of other house specialties which claim origins from various regions across Latin America. Look out for a grilled flank steak with fries or the “Parillada for Two” which features an assortment of grilled beef, chicken, and chorizo served with fries and house salad. You’ll see a few sandwiches here, too, like the “Choripan” which is composed of spicy chorizo, chimichurri, mayo, and tomato.

We enjoyed our first visit to LuLu’s. They’re bringing something fresh and interesting to the Little Rock food scene, which is always a delight to experience, and it’s probably safe to say that these folks are delivering some of the best food to reside in this location for quite some time.