For a while here in Little Rock, would-be restaurateurs or chefs would follow a predictable trend: get a food truck, learn the trade and then upgrade to a brick-and-mortar restaurant. The Southern Gourmasian, Pizzeria Santa Lucia [now The Pizzeria in the Heights], Katmandu Momo and Count Porkula have all followed this trajectory, and all enjoyed at least modest levels of success. But now, there’s Low Ivy Catering, a food truck and catering company that is taking the exact opposite route. Chef and owner Amanda Ivy has built her skills and reputation at several popular Little Rock restaurants, and now she’s setting out on her own in a tiny concession trailer attached to the back of a Toyota pick-up truck.
“I accepted the job at Sauced [Bar and Oven] a year ago,” said Ivy. “Right after that, I bought the Beast Food Truck. I was suddenly caught in this crossroads, you know, what do I do here? My husband, Kyle, and I talked about it, and I decided that I had made this commitment, I wanted to see this through. I feel like I got Sauced into a really good place with two sous chefs who are amazing. This is just something I’ve wanted to do for so long, and it’s nice to go ahead and do it.”
Before she was the executive chef at Sauced, Ivy worked at several well-known restaurants. She came up with Justin Patterson of The Southern Gourmasian, worked and participated in a food truck competition TV show with Donnie Ferneau, helped open Heights Taco and Tamale Co., and ran the kitchen at Old Mill Bread Company. In addition, Ivy created desserts for restaurants like The Fold and Raduno Brick Oven and Barroom. With each stop, Ivy has further developed her range while also honing in on her biggest passion: Southern cuisine.

“That’s what I grew up with, cooking with my dad,” said Ivy. “I think a lot of the roots of Low Ivy are going to be somewhere in there. At the same time, I don’t want to pigeonhole myself. I want to be able to throw some Asian influence or Mexican influence into it. But it’s all going to have it’s roots in Southern cooking.”
With the small food truck and Ivy’s unassuming demeanor, it can be easy to forget the most important element here. Ivy is one of the city’s best young talents in the kitchen, and her skills bring to life some familiar plates with vibrance and delight. In particular, her Collard-wrapped Sweet Potato Tamales are superb, with a lightly sweet, perfectly dense tamale layered in a deep, rich roasted tomatillo salsa. The flavors just explode out of the 3×5 foot mobile kitchen onto your palate. A deliriously fun Gumbo Dog puts her sausage-making on display, and the mammoth Andouille link is only matched in quality by the peppery gumbo on the top (and don’t miss the mustard and green onion potato salad on the side).
Ivy’s beginnings at The Southern Gourmasian are obvious without her having to say a word, most notably in her Fried Chicken Steamed Buns. It will be a long time until I forget Justin Patterson’s sublime take on the Chinese classic, but Ivy’s are great in their own right, especially with a hot, bright Gochujang slaw on top. And her baking skills haven’t diminished a bit in the truck; her Caramel Apple Poke Cake was lightly sweet and fully satisfying.

These were just a few of the dishes Low Ivy will have on the menu. Ivy plans to keep a rotating line-up to start until it becomes apparent what dishes are in highest demand. Ivy will wrap up her tenure at Sauced in February and is planning a full launch of Low Ivy Catering in March. Her next event will be Friday, February 8, at The Rail Yard in East Village, where she’s planning a faux Valentine’s menu loaded with menu puns (my favorite: a paired grilled cheese sandwich called “We’re Great Together in Bread”). Make sure you’re following Low Ivy on Facebook; you won’t want to miss when this truck is out and about. This is outstanding food already, and it’s only going to get better as Low Ivy finds its groove. 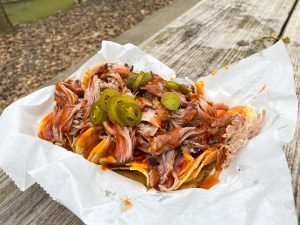 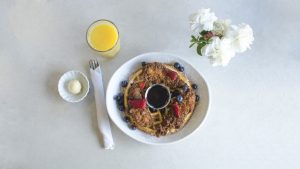