You’ve read about our favorites … now it’s time to take look at what some of the Little Rock top chefs enjoyed serving up in 2014. Special thanks to Stephen Burrow of Forty Two for sharing his Chef’s Best. 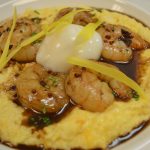 NOLA Shrimp and Grits
“I loved this dish because the flavors molded together so well. For the grits, we made a “popcorn bisque” and folded it in to the Logan’s Turnpike Grits. This gave them a very buttery and unique flavor. We also finished the dish with a poached egg, so once your fork hit the dish, you had a nice runny egg yolk over the top. It sounds very rich, but the sharpness of the NOLA bbq sauce on the shrimp cut through it all very well. The balance was my favorite part of this one. This is typically one we run on our early and mid summer menus in Forty Two.” 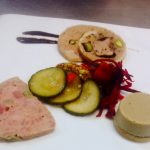 Charcuterie de Canard
“This one is an all around classic. Everyone from our kitchen chipped in on this and the technique really shows. It had a foie and duck ham terrine, a foie torchon, and a roasted duck ballotine paired with fig port reduction, house pickles, and root vegetable slaw. The whole idea was to get a bunch of ducks and utilize every last bit of them. We decided the best way to do so was a classic charcuterie board. We did this dish for Around The World: Lyon, France.” 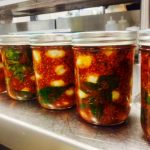 Pickled Quail Eggs
“This just came from a day in the test kitchen, but man o’ man were they good. We actually used my pickled shrimp pickling liquid and added fresh curry leaves. The results were outstanding. I think they mostly got used on staff meals and a couple of bloody Mary bars.” 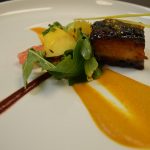 Shock Top Braised Pork Belly
“It came out so well, we put it on the menu for the summer. The best part about it was how perfectly each component on the plate paired together. It consisted orange marmalade crusted Shock Top braised pork belly, citrus salad, toasted cumin vinaigrette, and cucumber tartar. This dish was created for the head brew master at Budweiser.” 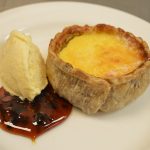 Arkansas Buttermilk Pie
“I’ll be the first to admit, I sometimes wish I was stronger in desserts. We have an excellent pastry chef, Anne Woodson, and her talents well exceed mine in this genre. However, this was one of the few dessert creations that I can call all mine from this year and I was ecstatic with the result. It was an Arkansas buttermilk pie with pecan crust, bacon ice cream, golden molasses, and tobacco marmalade. This dish was for a beer dinner we did in the summer. It is not one we typically run in the restaurant, but have done it following this for special events. We paired this with the Leffe Blonde Beer and it came out great.”