It was great to stop in yesterday and talk beans with @fidelandco. They are roasting some of the best coffee beans in the state, Fidel’s careful attention to the roasting process is a big reason for the great quality.
These shawarma fries at @maryams_grill might be our new favorite things. Get to know Maryam’s Grill in the new article up on the site.
Loving then we Alice in Wonderland themed cocktail menu at @bigo_midtown. This drink sent me down the rabbit hole.
We are excited for @cheesecakeonpoint’s new location that opened today. We had to go pick up some of these delicious cheesecake cupcakes.
Our absolute favorite time of the year is strawberry season. Made a quick mid-week trip out to @barnhillorchards to pick up these beauties this morning.
Well hello there beautiful. This gorgeous meatball pizza from @raduno_lr is as delicious as it is good looking.
Want the perfect patio beer to help you get through the week? Head to Vino’s Brewpub today and catch the debut of the newly kegged Dunbar Pear Cider, a collaboration between Theron Cash of Stone’s Throw Brewing and Josiah Moody of Moody Brews and Vino’s.
I’ve had a chance to try the tasty nectar and I can say to those who aren’t necessarily cider fans for fear of a sugar rush, you’ll like this one. It’s drier and more drinkable than most American Ciders.
Moody says, “I’ve always been a fan of Stone’s Throw’s Petit Jean Pear Cider, and I’m always wanting to try something new.”

The collaboration combines the base for Stone’s Throw’s Petit Jean Pear Cider along with the unpredictable strain of wild yeast that local brewer Grant Chandler cultivated a while back from the Dunbar Garden.
Moody and Cash, who have worked together in the past, are adept at combining their different areas of expertise. Cash says, “We’ve each got our own styles, so when we throw ideas off of each other, they’re coming from different parts of the field. Then we figure out how to make them work together and usually come up with something off the wall.”
Moody, who says he’s known Cash since before Stone’s Throw opened, says, “I feel like we often manage to work collaborations without being too one-sided. We both bring different things to the table.”
The fun of coming up with this brew centers on the unpredictability of the yeast. Moody says, “I was really excited to see the final outcome because this yeast is every bit as nuanced to me. I just the love way it is turning out.”

Cash added, “We knew it was going to ferment a bit differently, and it was actually quite a bit different than what we would get with the Dunbar Yeast in a malt-based beer as opposed to a pear-base.”
The outcome is a spring beer that, while approaching a sour, still holds a little tartness as well as the essence of the pear. At 5.8 percent, the drink is not without characteristics of a Farmhouse Style Ale – Moody’s specialty.
Think drinkable, dry, and lovely.
Cash says it best, “It has more of a mass appeal – it’s definitely a good patio beer.”
Enjoy this brew at Vino’s today, or head to Stone’s Throw this Friday to see it debut as part of New Brew Friday. 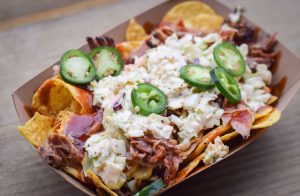 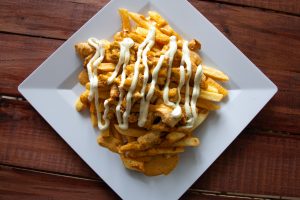