While we at Rock City Eats tend to focus on the food scene here in central Arkansas, we’ve discovered plenty of great eats all around the state, too. Arkansas’ highways, byways, and small towns are ripe with numerous excellent restaurants, dairy bars, drive-ins, and bakeries of all sort. In this regular feature, we explore some of these places and encourage you to pull over and sample some of the greatest food from “Around Arkansas.” Next up, a classic candy operation in Arkadelphia…Juanita’s Candy Kitchen.

Pull Over: If you’re headed anywhere in the southwest regions of the state or beyond, there’s a good chance you’re traveling along I-30. And if you’re passing through Arkadelphia, one thing should immediately be popping into your brain…brittle. The best brittle in the state, in fact.

The Story: Ms. Juanita’s story dates back to 1974, when she began making brittle from a small building behind her home, and traveling around the state to sell it out of her car. Ms. Juanita passed away in 2001, but the business is still operated by her sons today. Ms. Juanita’s picture still hangs proudly on the wall of the candy kitchen shop.

If you’re in Arkadelphia, it’s a given that you’re stopping by Juanita’s home base to pick up some brittle. The entire operation is a large factory with a small showroom on one side of the building selling Juanita’s candy in all its varieties. However, the stuff is so popular around town, that it’s also sold in most gas stations and grocery stores in Arkadelphia. (On my trips to Dallas, I purposefully pull over for gas in Arkadelphia to fill up my tank and nab some brittle.)

However, you don’t need to drive all the way to The ‘Delph to get your hands on some of Juanita’s brittle. This time of year, there’s several stores all over the state that stock the sweet concoction for the holidays. In Little Rock, stop by Eggshells Kitchen Co. on Kavanaugh or The Crown Shop (both locations) and they’ll get you hooked up.

You can even order call, fax, or mail in an order and have this beautiful brittle delivered to your home. You really have no excuse if you’re not eating this stuff very soon. 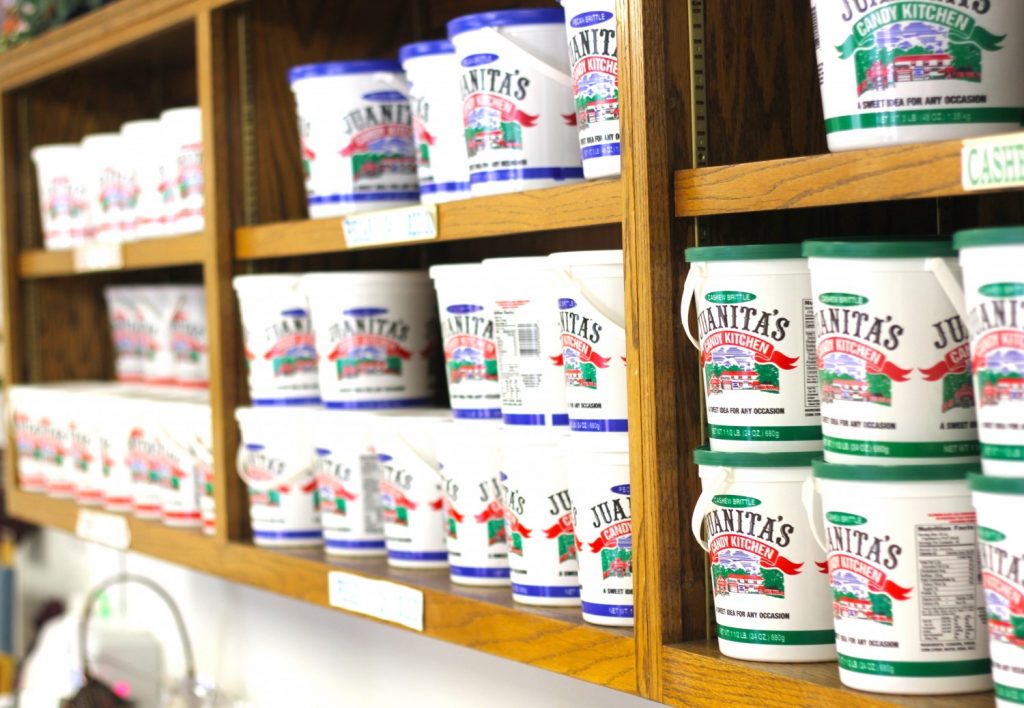 The Food: What makes Juanita’s brittle so special? What makes it the best brittle you’ll ever wrap your tongue around? Hard to say, really. The ingredients are simple: sugar, corn syrup, and nuts. That’s it…nothing magic there. But part of its wonder is its exceedingly thin and shatteringly crisp nature. It’s laced with sweet and buttery notes throughout alongside crunchy, roasted nuts. It comes in three varieties…all of them fantastic: peanut, pecan, or cashew. (I’m partial to pecan, myself.)

The Verdict: Juanita’s brittle is a perfect stocking stuffer…but it’s just as good any other time of year. If you even remotely enjoy nut brittle, or even if you don’t, you need to at least give this stuff a try. Juanita’s is an Arkansas institution that wholly deserves its glowing reputation.